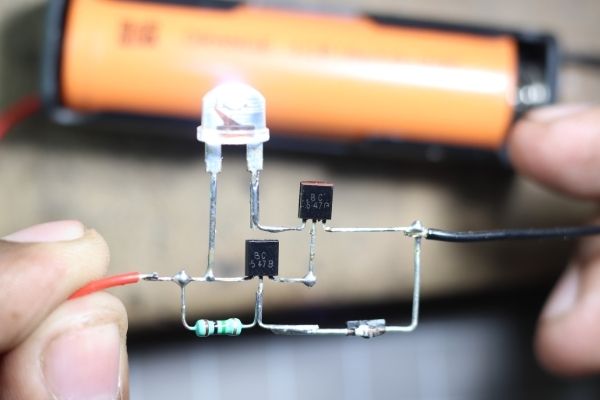 Here I made a simple Darkness sensor circuit using a Diode. Every Diode is mainly made up of P-type and N-type semiconductors.

These semiconductors are secured in a Black casing. This is because light from outside will create obstacles to the Diode’s main works.

Here I removed the protective cover of the Diode and exposed it with direct light and I found there is a continuity going on to the circuit.

So, I used these specific characteristics to make a simple Darkness sensor.

There is the simplified diagram made through EasyEDA.

How does the 4007 Simple Light Sensor work?

I have found nearly the same characteristics in a general-purpose diode. That’s why I just broke a diode shell and I find there are two conductors inside In it. They are P and N-type Semiconductors. The semiconductors and mainly doped with Silicon. So when we expose the internal material of the diode then the diode becomes conductive and able to flow current through it.

In the same principle, I made the circuit if you see the circuit diagram carefully you can see the diode is connected in Reverse Bias. So it means that it will not flow any current from Vcc to the ground without any modification.

This is a simple case. After when we modify the diode we can see when we give light to the diode then the LED will off